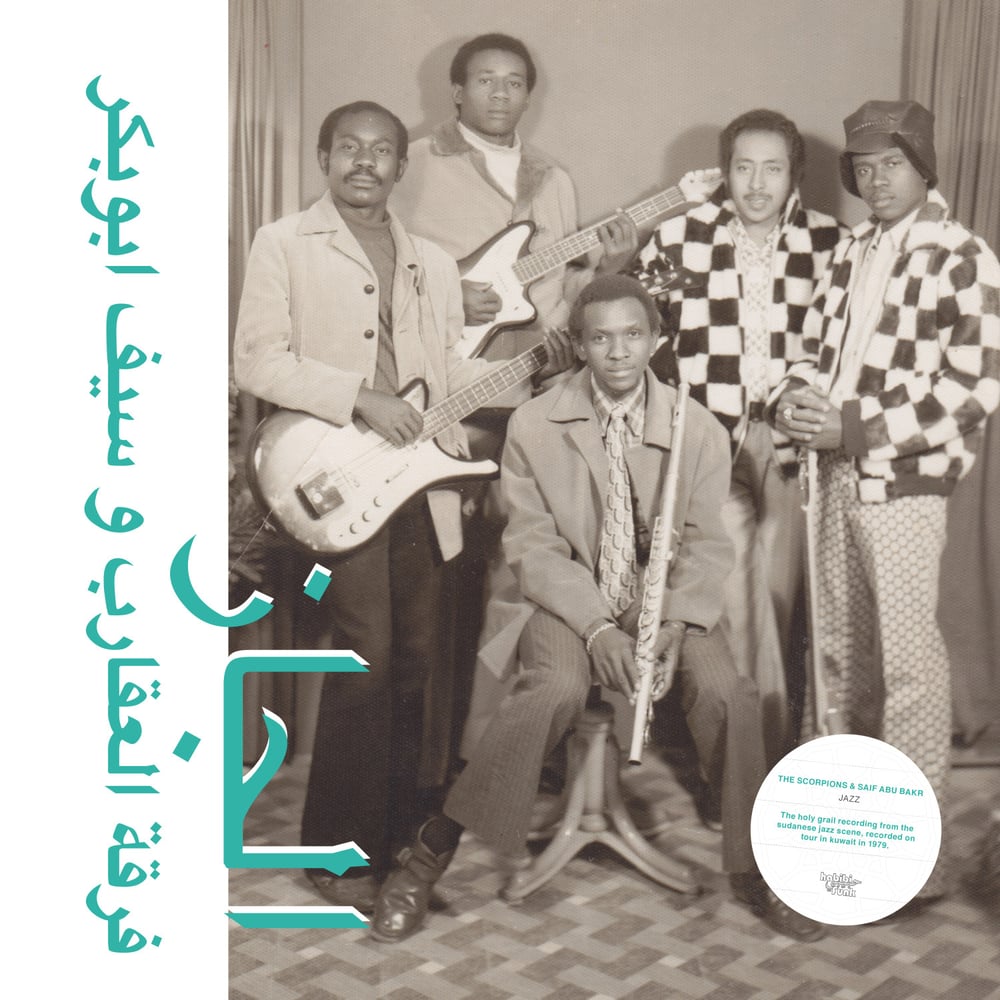 Incredibly unique modernized adaptations of traditional rhythms of the diverse regions of Sudan, recorded in Kuwait 1980. The “holy grail” album from Sudan.
I heard about Seif Abu Bakr and The Scorpions maybe 3-4 years ago. Their album “Jazz, Jazz Jazz” ended up on my radar because of an eBay auction with the bids eventually rising daily up to a staggering 1000$. The music is a unique combination of incredible horn arrangements powerfully performed, a vigorous drummer contributing a funky backbone and Seif's vocals uniting those elements. The results range from instrumental tracks awaking memories of 1970s crime thriller soundtracks to more Sudanese-rooted tracks, a lot of them modernized versions traditional rhythms of the diverse regions of Sudan and even an excursion into Colgolese Soukouss.
I went for my second trip to Sudan in December 2018 and after doing some research on the first trip my local colleagues Larissa and Yassir had managed to reach Amir, The Scorpions band leader and he was happy to meet. We got together with him in a Cafe right at the Nile in Omdurman. It was a happy occasion for everyone. He told us stories about him meeting Jimmy Cliff and Lewis Armstrong when they visited Sudan and how he and his band mates from The Scorpions played extensively in Kuwait, both in club residencies as well as for television. Amir brought tons of incredible photos illustrating not only the bands history but the vivid cultural live in the many music clubs in Khartoum of the 1970s. During this decade up until 1983 the capital was home to a huge number of clubs, bards and concert halls. This scene started to perish after president Nimeiry's turn away from his socialist policies, that he was widely associated with in the first decade of his rule, towards the implementation of Sharia law in 1983. During the first decade of his rule he had actively supported various artists of the Jazz scene, taking some of them on trips throughout Africa. The 1989 coup of Bashir and his generals then caused the final blow to a once thriving scene. Both of these political events within 6 years lead to significant drawbacks for the Sudanese jazz scene resulting into hardly no gig opportunities left and parties and concerts being critically observed. A number of musicians faced prosecution, most of the time for their political views, some left Sudan for good. Music never completely vanished from public life and even the regime kept selected artists close, but for a majority of those bands affiliated to the jazz scene life and making ends became a lot harder. The Scorpions dissolved as a group around the same time.

The re-release was produced with a clean copy of the vinyl version as a source. The original reel tape of the album stayed with Saif Abu Bakr along with another reel with other recordings that were never released. Unfortunately it was lost when Saif Abu Bakr had to flee to Kuwait temporarily during the second gulf war when Iraq raided Kuwait. Both the CD and vinyl version come with extensive booklets with photos, interviews, liner notes. The vinyl version also has a DLL code.